We are excited to announce the launch of an ABC-AR project funded by CHAL in May 2017 and our support of another ABC-AR project that desperately needed funds. First off, a big thank you to all the donors who made this possible!

We funded Kerala-based FIAPO, an apex animal rights organization that partners with a network of other animal welfare organizations. Last year, the state of Kerala in southern India, made headlines for all the wrong reasons. With the blessing of local authorities, men there have been culling stray dogs on the streets in a horrific way. The authorities erroneously think that this will end the problem of people being bitten by the dogs and keeping the stray dog population in check. Fortunately, FIAPO stepped in and announced last November the launch of a ‘Rabies-Free Kerala‘ campaign. 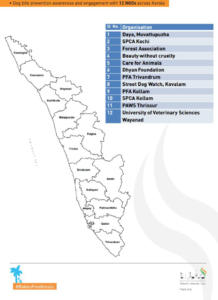 Under FIAPO’s guidance, 12 animal welfare organizations are now working in various districts of Kerala on the ABC-AR program, which is in full swing in the districts of Kollam, Palakkad and Kannur.

We are so glad that CHAL could kick-start the program. Stay tuned for project updates and photos from the field.